Our first impression of the Smithsonian Museum of Natural History was a good one: it was cool in there! Also the stuffed elephant they have standing proudly in the lobby is very impressive. The bag inspection at the door felt a little less good—we could wish the checkers could have shown a little more patience and kindness, but then I understand that they're dealing with a lot, so I can give them a pass.

welcome to the museum!

On a Sunday afternoon the place was a little crowded, which explains our error of doing everything backwards: just inside the door we headed straight for the closest cool thing we saw, some giant fossil animals. But it turns out they were mammal fossils, and as we proceeded through the exhibit we passed into dinosaurs, then eventually to the origins of life. The boys enjoyed some very well-made film presentations, and the big skeletons were interspersed with small, but very detailed, dioramas showing the animals as they looked with skin, which we appreciated.

We also went backwards on the second floor. As soon as we got up the stairs I rushed us over to look at the Hope Diamond, then we moved on to a few rooms of cut gems alongside the minerals they're made from. Through the other side of that we entered a wonderful space made to look like the inside of a mine—it was so realistic it was hard to believe we weren't deep in the bowels of the earth. Then the next section was on volcanism and plate tectonics. The Hope Diamond is actually kind of underwhelming—though I did enjoy learning about its history—but the other gems were very arresting. So was the world's largest flawless crystal sphere.

underground on the second floor

There was tons more that we would have loved to see—we were there for three hours and could easily have enjoyed a visit twice as long. As it was we were trying to leave for maybe fifteen minutes, but kept getting distracted by "one more thing!" Maybe we'll go back some day. How about in ten years?

We've been sticking close to home on weekdays the last few weeks, so yesterday I thought it was time for a big outing. It's a little cold for hiking; a indoor entertainment in the big city seemed like a safer bet. Of course, there was also a lot of outside time involved. Never mind, we're tough. At least the train was warm.

Being cheap we did some walking to get to the train, stopping by fields and streams on the way and not quite falling into the water of Alewife Brook (Zion always insists on testing the cat ice to prove, yet again, that he is heavier than a cat). Zion and Lijah haven't been on the T in a while so they really enjoyed that part of the trip.

Arriving in Cambridge we went first to the Kemp Playground. Well, we went first to the public restroom that's perched precariously on the intersection where Garden Street meets Mass Ave, where we enjoyed the sight of ice in the toilet bowl. Then the playground, which we had to ourselves for close to an hour of climbing and imaginative play. It's fun being there with lots of other kids, but there's also something to be said for a solo visit.

The main reason I chose Cambridge for a Wednesday visit is that on Wednesday afternoons Massachusetts residents can get into the Harvard Museum of Natural History for free. Since there's no chance I'd ever pay $45 for the four of us to visit, Wednesday is it! There's definitely some interesting stuff there: dinosaur bones were the main draw for us this time, but we also enjoyed the dead animals—especially the animals of the northeastern woodland—and the minerals.

Lijah also enjoyed that I brought a snack; otherwise he might not have survived the hour-and-a-half we spent in the museum.

Heading back to the train the most direct route took us through Harvard Yard. That was great because it let us enjoy one of the perks of first-class university education: free games and entertainment! (assuming you're not the one paying for your schooling). It was "Winter Fest" outside the Science Center building, and among the offerings were bowling, shuffleboard, and curling. How could we resist?!

Even the train ride towards home was entertaining and educational, as Harvey and Zion explored momentum by jumping while the train was braking. The other passengers were very patient with them.

It was a good time. Plenty of walking, plenty of intellectual stimulation, and a fair bit of adventure. I picked up a Charlie Card at the train station, since we might be doing more urban adventuring soon.

The moments from the week will be a little sparse tomorrow because for a combination of reasons I took almost no pictures over the past week. That means we'll miss remembering—among other things—some beautiful sparkling sunshine, six boys on one couch playing Mario Kart, and our first at-home Pokemon tournament. But worst of all, I forgot to bring the camera yesterday when we visited the Discovery Museum and played in the old house for what may well be the last time ever.

See, after 35 years of delighting children of all ages from 1-8, the museum folks feel that they've outgrown the not-huge Victorian house where it all began. It wasn't enough to supplement it with an education space and a science museum for older kids and the best playground space ever—with the original museum feeling cramped and shabby (not to mention far from ADA-compliant) they plan to bring all the indoor exhibits together under one roof. That roof is currently scheduled to open February 10, at which point the house will be closed to the public forever.

Sad news. The museum as it is has a ramshackle charm that's really hard to find these days. All the exhibits are clearly made out of recycled material and things you can find at any hardware store. And the fact that they're sited in what's very clearly still a reasonably modest single-family home drives home the point that you, too, could be as creative if you cared to. What a discovery!

But times change, and Yelp reviewers in 2018 demand flashier design and cleaner carpets (plus universally accessible bathrooms, for preference). As I wrote when I first learned of the proposed changes last year: given the fantastic success of Discovery Woods I'm inclined to give the museum leadership the benefit of the doubt. There will be wonderful things in the new museum when we visit it (in late February at the earliest!). But it won't be the same. We very much enjoyed our visit yesterday, and I really wish we had photos to prove it.

Instead we just have to remember things in our minds. Who even does that?!

I know I've mentioned it before, but since we spent some time last week playing in the Discovery Woods part of the Discovery Museum, I wanted once again to write about how much I love it.

We visited on a chilly wet day, with rain and snow falling intermixed, and the main part of the museum was pretty crowded. But when we headed over to the Woods area, we found that we had it all to ourselves. Maybe the closed doors on the house building kept folks away; maybe it was the fact that, when we went inside, the cold air seeping up through the gaps in the floorboards made it just as chilly inside as out. But it was significantly drier! And I don't know how anyone could resist a place like this.

I guess you could call it a treehouse...

Never mind the fact that we could see our breath, the warm materials and clever design made the space feel wonderfully welcoming. We built block towers, played hide-and-seek, and experimented with the periscopes. Then the boys cuddled under the pile of sleeping bags someone had so kindly left in a corner while I read them a story.

so much to see and do

In my mental "ideas book" for our current and future home improvement projects, this space is right there on the cover. We're a little sad to hear that the management will soon be closing the original, iconic victorian house that currently holds the "Children's" part of the museum, and building a new structure to house the same sorts of exhibits; but given how perfect a job they did on Discovery Woods I'm prepared to give them the benefit of the doubt.

Yesterday the boys and I spent an afternoon at the Discovery Museum in Acton. It wasn't only that we needed more chicken supplies from the feed store down the street; I really want to expand their brains with the power of well-designed play!

Last time I went was just with the two younger boys, who could spend all day in the "Children's" part of the museum. Harvey has other interests, and with him leading the charge we soon headed over to the other building for some Science Discovery. Happily, even Lijah likes science too: he was entranced by the heat camera, and watched his own rainbow form on the screen with delight. 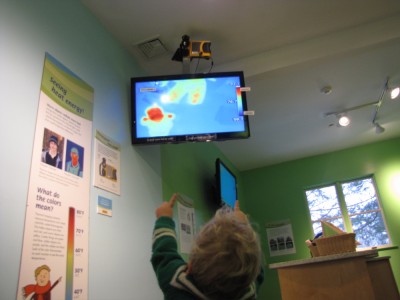 While I couldn't interest the older boys in a truly scientific investigation of what the camera revealed—like the fact that Harvey's hair is vastly more insulative than Zion's—they were amused to notice that their skin is in fact hot all over, and their clothes keep the heat in.

There were also opportunities for personal growth. Harvey was brave enough to approach the woman running the pendulum-table spirograph to ask for a turn (and he wanted to make one as a present for Mama!). Zion got lost a whole level away from us and didn't scream or cry. And Lijah overcame a new-found fear of humidifier steam ("no smoke! no smoke!") to be able to spend a good half-hour in a room with a seven-foot-high water vapor tornado. Good times all around!

Plus, we picked up the chicken feed on the way home.

The squibix family is Dan, Leah, Harvey, Zion, and Elijah Archibald, plus Rascal and the chickens. We're working to liven up the suburbs with our relaxed mix of hippiness, anarchism, and Christianity, along with all sorts of things that might go under the heading of "homesteading".

We've been blogging at squibix.net for more than ten years; we hope you find plenty to read and enjoy!